New Album from The Deer Tracks 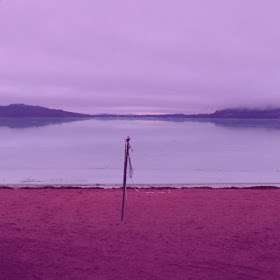 It's been a while since the swedish electronica duo The Deer Tracks (conscisting of Elin Skeppstedt and David Lehnberg) released new music. About three years to be more precise. With that in mind this new release is (at least for me) like reuniting with an old friend after a long period of time. I first discovered The Deer Tracks music in 2007 on myspace and was instantly amazed by how lion-hearted and innovatory their sound was. That conviction has followed me during The Deer Tracks continued history and certainly on the new album Undersvik. The album contains ten atmospheric tracks infused with scandinavian melancholy and encapsulated in international fast paced electro sounds. It's experimental and modern but still holds a great amount of mysticism . It's hard not to respect the fact that a band touring so frequent as The Deer Tracks still manages to create a record filled to the absolute breaking point with creativity and content. The Deer Tracks is really good at creating a dynamic soundscape and the balance between dark electronica and Elin Skeppstedts airy vocals sometimes sounds a little like the danish electro pop project As in RebekkaMaria. Weekly Indie Pops favourite track from Undersvik is the thin aired and melodic piece Gossip. Though released late 2016, Undersvik makes for a great start of the new year.